The foundation of Next Generation School rests upon the belief that our students - both individually and collectively - possess the ability to have a profound impact on the world around them.

We are, therefore, committed to providing and developing opportunities for younger students to positively impact our school community and for our older students to reach out in service to our broader local, national, and global communities.

Through self-initiated projects and school-sponsored initiatives and partnerships, children experience community engagement as an integral part of the learning process, gradually deepening their understanding of our vastly interconnected world.

The school’s involvement at the hospital was initiated with a student art exhibit, which was displayed in the Family Waiting and Activity Area on the Pediatric floor. The original exhibit featured eight, framed landscape scenes and flower drawings, each by a Primary School student. One collaborative canvas created by Next Generation Middle School sixth graders was donated to the Carle Pediatric Unit. Since then, the Fine Arts Department has continued to rotate the artwork in the eight exhibit frames on a regular basis making the Next Generation art exhibit a permanent feature on the floor for patients and their families to enjoy.

Next Generation School expanded its relationship with Carle Foundation Hospital Pediatrics to include the “Healing Hearts Project.” Students perform a variety of solo and ensemble pieces for patients and their families at various times throughout the school year. The school also donates Pediatric Playroom art supplies purchased with funds raised through the school’s bake sales.

Each year, the students, the fine arts department, and the school community continue to collaborate on donation drives, fund raising, and other initiatives to benefit our nearly decade-long partnership.

A true, fund-raising classic, the Bake Sale delights taste-buds each semester.  As any student will tell you, the sweet treat is a highlight of the day, but the true happiness comes from what the sale of these little morsels provides. Every dollar of the proceeds helps to fund much needed supplies for our partnership with Carle Pediatrics.

As part of our outreach partnership with Carle Foundation Hospital’s Pediatric Department and in support of Pediatric Cancer Awareness month, NGS invited its students to bring their favorite stuffed animal to school one day during a week in September. In return, students were asked to donate a new stuffed animal. These tender gifts from the students of NGS were given to the pediatric department to be distributed to patients that endure long hospital stays during treatment. 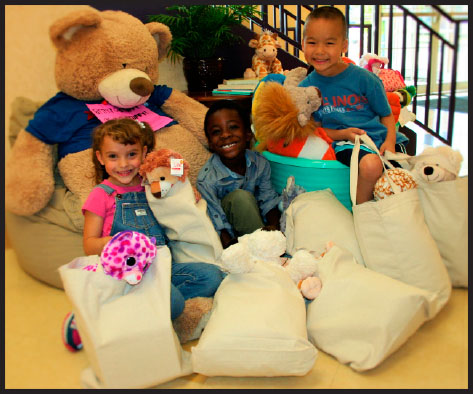 We encourage students to pursue individual passions, entrepreneurial efforts, and non-profit causes at any time throughout the course of the year. Through independent student projects we give students a platform to achieve their goals and individual interests in global citizenship.